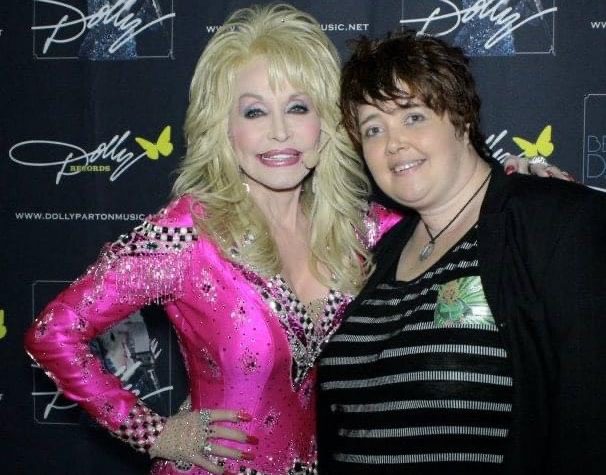 In 2012 Lisa may never have imagined that now she’d be an international songwriting contest finalist with her songs viewed online thousands of times. Nor that music would be an avenue to talk about mental health for the benefit of herself and others.

It was in 2012 that Lisa had her first hospitalisation and, in the same year, she met her music idol, Dolly Parton on Dolly’s Better Days tour – something Lisa says sparked better days for her.

Having previously experienced many dark years, Lisa’s now embracing the therapeutic benefits of music for both self-expression and healing.

In the years that followed 2012, Lisa had severe lows – there were times when Lisa hadn’t been able to leave the house. But in 2016, she began writing, something she hadn’t done since childhood. And writing music led to breakthroughs.

“Music is healing to me. It’s also a way for me to communicate: say what I need to say and what others want to be able to say. Music is powerful. It can take you back in time and bring you forwards. For me, it’s better than therapy,” she said.

For Lisa, who experiences both psychosocial and borderline personality disorder (BPD), she often finds herself misunderstood. She says even psychologists can be hesitant to work with people who have BPD – an isolating experience. Carrying those labels can be a heavy burden, one music is helping to lessen.

“Through music, I’m blowing that stigma away by showing a positive angle to it. As I heal, I’m trying to climb mountains, rocks fly back sometimes, but through it, music is my grounding tool.”

Finding music hasn’t just been therapeutic for herself and others, it’s led to accolades too. Lisa became a top ten finalist in the World Song Writing Awards with not one, but two of her songs. A coup when you consider that in her category, Modern Country, there were 700+ entries from 129 countries worldwide.

One of those songs, Don’t Lose Faith in Me, has been streamed on Facebook 10,000+ times and if the comments are anything to go by, the song has been healing for others too.

“Mental Health is an unseen disability,” she writes on the Facebook post, “and one that a lot of people don’t recognise… I want to be able to help people like myself with mental illness, families, carers and the wider population, realise that reaching out and starting the recovery path, can with a lot of hard work and supports, be so rewarding.”

One key to Lisa’s success has been the ability to use her NDIS funds flexibly.

Lisa used her funds to purchase a laptop to connect to telehealth services, which also enabled her to connect with a mentor remotely during COVID, and a microphone to record both online and in-person and is participating in Wild at Heart – an organisation supporting music and art-makers who experience disability. ​​Wild at Heart organises open mic nights, workshops and pairs participants with mentors – something Lisa has found very useful.

With myAutonomy, Lisa has the choice and control to spend her funds flexibly for the services that’ll benefit her most. In addition to music, she’s also using her funds to study Komyo ReikiDo. The practice involves meditation and other relaxing practices, which are helping her maintain positive mental health.

“myAutonomy has been incredible. I can’t say enough good things about them. Generally, when people discover I have mental health, they’re quick to judge. There’s a real human approach to myAutonomy – they don’t treat me any differently and I can spend funds in the best way for me.”

Lisa’s musical journey is far from over. She continues to write and record songs, she’s currently entered in another international songwriting competition and is even launching a CD. We can’t wait to see what she does next.

If you’d like to explore ways to use your funding creatively, we’d love to chat. Don’t let the minefield of NDIS plan budgets hold you back from achieving your own dreams. Call us on 1300 60 33 89, or email us at info@myautonomy.com.au